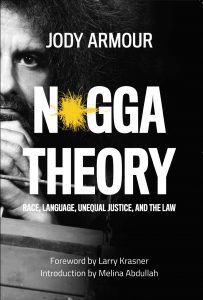 The University Club of USC presents our next installation of Real Talk on Racism with Professor Jody Armour in conversation with Professor LaVonna B. Lewis. They will dive into Armour’s new book, N*gga Theory: Race, Language, Unequal Justice, and the Law (Los Angeles Review of Books, 2020).

More about the book:

America’s criminal justice system is among the deadliest and most racist in the world
and it disproportionally targets Black Americans, who are also disproportionately poor,
hungry, houseless, jobless, sick, and poorly educated. By every metric of misery, this
nation does not act like Black Lives Matter.

In order to break out of the trap of racialized mass incarceration and relentless racial
oppression, we, as a society, need to rethink our basic assumptions about blame and
punishment, words and symbols, social perceptions and judgments, morality, politics,
and the power of the performing arts.

Professor Jody Armour (Negrophobia and Reasonable Racism) calls for bold action:
electing progressive prosecutors, defunding or dismantling the police, abolition of the
prison industrial complex. But only after eradicating the anti-black bias buried in the
hearts and minds of millions of Americans and baked into our legal system will we be
able to say that Black Lives Matter in America.